News Literacy:
In my opinion, news literacy is the ability of knowing whether a source is credible or not through different sources. This applies to modern news, also known as current events that happen in the news today. For example, if you are researching for a presidential candidate to elect, you don't just look at a source comparing Hilary and Trump written by Trump's manager. 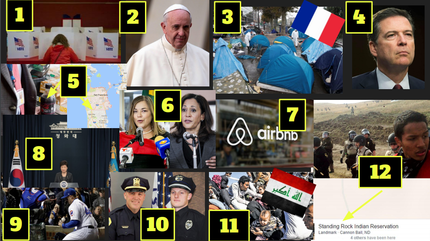 1) Presidential election is happening.
2) Pope says women can never be priests.
3) Thousands of homeless migrants are sleeping in the streets of France
4) James Comey is being accused for interfering in the presidential election telling Congress that the feds had found new e-mail that could be relevant to the investigation into Hillary Clinton's private server
5) University of California, San Francisco is removing sugary drinks.
6) Kamala Harris and Loretta Sanchez are fighting to fill the first open senate seat in the quarter of a century.
7) Airbnb makes it hard to sue for discrimination
8)President from South Korea apologizes for a political scandal caused by her administration.
9) The Cubs won the World Series on Wednesday.
10) Two policemen got killed in Iowa.
11) Battle in Mosul with Isis.
12) The protest against the Dakota Access Pipeline at the Standing Rock Indian Reservation in North Dakota are, on the surface, about water quality